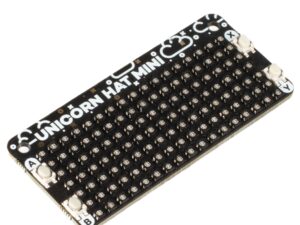 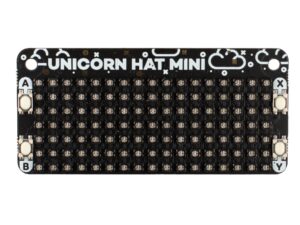 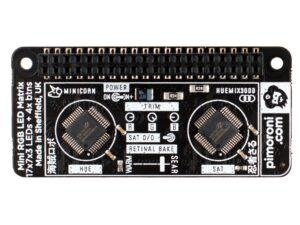 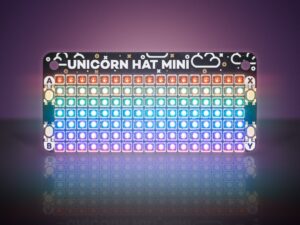 Unicorn HAT Mini is a 17×7 matrix of RGB LEDs that can be controlled, both in terms of colour and brightness, to display animations, text, simple images, and more. The four tactile buttons add tonnes of utility to control the colour or brightness of the LEDs, or as controls for simple games, or whatever else you like.

There's no fiddly soldering, as the header is pre-attached. Just pop it onto your Raspberry Pi and start pooping out rainbows faster than you can say "Richard of York gave battle in vain".

We've put together a Python library for Unicorn HAT Mini that makes it simple to control individual LED's colour and brightness, display images or test, make games, and more. There's some really fun examples of how to use the buttons for games, with Simon Says and a fun little Columns-type game with coloured, falling blocks.

Because the pixels and the driver chip are different to all of our other Unicorn boards (Unicorn HAT, Unicorn pHAT, Unicorn HAT HD, Ubercorn), examples and code written for those other boards won't run directly without a few tweaks to the code first.