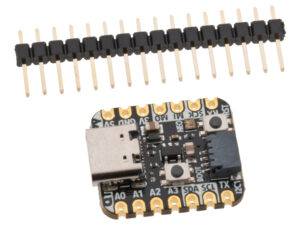 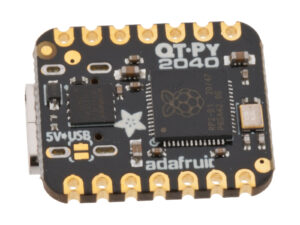 What a cutie pie! Or is it… a QT Py? This diminutive dev board comes with one of our new favorite chip, the RP2040. It's been made famous in the new Raspberry Pi Pico and our Feather RP2040 and ItsyBitsy RP2040, but what if we wanted something really smol?

A new chip means a new QT Py, and the Raspberry Pi RP2040 is no exception. When we saw this chip we thought "this chip is going to be awesome when we give it the cuuutie QT Py Treatment", and so we did! This QT Py features the RP2040, and all niceties you know and love about the original QT Py

The star of the QT Py is our favorite connector – the STEMMA QT, a chainable I2C port that can be used with any of our STEMMA QT sensors and accessories. Having this connector means you don't need to do any soldering to get started.

What can you pop into the QT port? How about OLEDs! Inertial Measurment Units! Sensors a-
plenty. All plug-and-play thanks to the innovative chainable design: SparkFun Qwiic-
compatible STEMMA QT connectors for the I2C bus so you don't even need to solder. Just plug in a compatible cable and attach it to your MCU of choice, and you’re ready to load up some software and measure some light.

Use any SparkFun Qwiic boards! Seeed Grove I2C boards will also work with this adapter cable.

Pinout and shape is Seeed Xiao compatible, with castellated pads so you can solder it to a PCB with a cut out to allow the bottom components some breathing room. In addition to the QT connector, we also added an RGB NeoPixel (with a controllable power pin to allow for ultra-
low-power usage), and both boot-mode and reset buttons (great for restarting your program or entering the bootloader). This QT Py comes with loose 0.1" headers you can solder in for breadboard use

While the RP2040 has lots of onboard RAM (264KB), it does not have built-in FLASH memory. Instead, that is provided by the external QSPI flash chip. On this board there is 8MB, which is shared between the program it's running and any file storage used by MicroPython or CircuitPython. When using C/C++ you get the whole flash memory, if using Python you will have about 7 MB remaining for code, files, images, fonts, etc.

* Same size, form-factor, and pin-out as our SAMD-based QT Py
* USB Type C connector – If you have only Micro B cables, this adapter will come in handy!
* RP2040 32-bit Cortex M0+ dual-core running at ~125 MHz @ 3.3V logic and power
* 264 KB RAM
* 8 MB SPI FLASH chip for storing files and CircuitPython/MicroPython code storage. No EEPROM
* Native USB supported by every OS – can be used as USB serial console, MIDI, Keyboard/Mouse HID, even a little disk drive for storing Python scripts.
* Can be used with MicroPython or CircuitPython
* Built-in RGB NeoPixel LED
* 13 GPIO pins (11 breakout pads and two QT pads):
* Four 12 bit ADCs (one more than Pico)
* Two I2C ports (one on the QT connector, one on the breakout pads)
* SPI and UART peripherals, in standard QT Py locations,
* PWM outputs on every IO pin – for servos, LEDs, etc
* There are 6 GPIO in consecutive order for PIO compatibility
* 3.3V regulator with 600mA peak output
* 12 MHz crystal
* Both Reset button and Bootloader select buttons for quick restarts (no unplugging-
replugging to relaunch code)
* Really really small